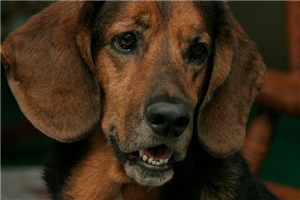 One evening in the fall of 1997, I received a phone call from my brother Chris telling me of a stray puppy who had followed he and his dog Simon home from an evening walk in the suburbs of Houston.  I’m almost certain I blurted out an emphatic “yes” before Chris even had the chance to ask his question of whether we wanted to add another mammal to our growing collection –  three kids, Bill the Poodle and the impending arrival of our fourth and final issue.  I choose to blame my alacrity of accepting my brother’s generous offer on my raging and unpredictable hormones in my seventh month, not my genetic propensity to be soft-hearted towards any and all animals. Rosie, my sister-in-law, had been calling the dog Barney because she said he followed their dog around much like the cartoon character Barney followed Fred around in The Flintstones.

Common sense did prevail (briefly) as I had my father visit with my brother to predict Barney’s approximate size at maturity.  For whatever reason, we didn’t want a big dog. My father’s conclusion: He would top out at around 20-25 lbs.  It probably didn’t really matter at this point, but that sounded reasonable, doable, and provided me with cover that I had performed sufficient due diligence. We planned for Barney’s arrival.

No doubt the kids were expecting a small puppy.  It was going to be their first dog (Bill was mine and John’s) and new dogs always arrive as small puppies. Chris and Rosie pulled in late on a Friday night of Halloween weekend, well after the kids were asleep. I still remember opening the door and seeing my brother holding this VERY long dog, a dog that was clearly nearing the 20 lb. mark. Barney would reach near 55 lbs. at his peak (thanks, Dad), but I am certain that Barney had already reached his maximum, adult length when we first laid eyes on him.  He was just so very long! 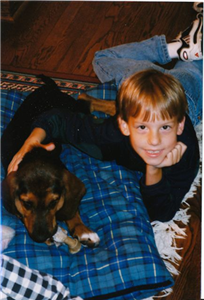 Any worries the kids would be disappointed that Barney wasn’t a cute cuddly puppy were quickly allayed when they began to interact with him.  He was so gentle, so hound, so unexcitable from the very start.  And thanks to Rosie, he was already trained and bilingual!  Even John had to admit he was a good dog and so he stayed and to this day I think Chris and Rosie might have regrets that they let go of such a fine specimen of a dog.

Barney had extraordinary patience.  Yes, he had Bill the Poodle from the start, the energetic, slightly off-kilter Bill, the dog with the very small cranium.  After Bill, the pesky miniature dachshund Fred joined us.  Along the way we added kittens and cats, Frieda and Frank, our backyard cats having the most longevity.  Then, just as Barney was entering the golden years of retirement, we introduced Theo the retriever (so much for my past concerns about “size”).  Though Barney wasn’t thrilled with the addition of Theo, the compliant, the obedient, the tolerant Barney adjusted.  He lived through the noise and chaos, the melee of a menagerie of kids and kittens and dogs, all with extraordinary grace and forbearance. He was the elder, the senior statesman of our pets and he wore this mantle well.  Much of our family history resided within and along side our life with Barney.

I still remember the time, shortly after we had moved into our present house and with all the neighborhood kids over, when the end of Barney’s tail was severed in the taut screen door to our backyard.  Barney’s tail kept wagging and the splattering of blood rendered our laundry room and the immaculately coifed kids (not mine!) covered in blood, as if they had just witnessed the violent slaughter of something or someone. They went running home, I raced Barney to the vet and I think our family probably gained a not so flattering reputation in our new neighborhood after this.

Barney represented the Platonic ideal of dog.  He was the quintessential, archetypal dog.  All the characteristics that make us love our dogs so much were there in Barney.  He required so little, demanded nothing of us and, as so many dogs before him, loved unconditionally.  The artistic side of man may very well have been created in God’s image, but the compassionate, forgiving, non-judgmental part of God?  Those are the things he put in our dogs because nothing more accurately represents the universal qualities of goodness that all faiths attribute to a higher being than the extraordinary goodness of dogs.

And so it is with great sadness that we had to let go of our Barney this morning, with the very able and tender assistance of Dr. Carol Cass.  We are profoundly distraught because we will, selfishly, miss his loving presence, his sweet countenance, his gentle ways.  But we are also moved because, in a world of such strife and bitterness, hatred and intolerance, a really good part of the oneness of all living things has been chipped away.  One of our greatest teachers of what it means to be a spiritual being has departed this world. 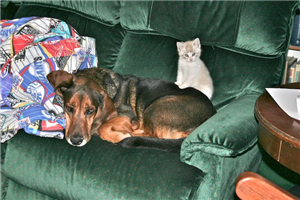 We are grateful for the years of happiness he brought us, and we are very thankful for the kindness many of you showed Barney simply by calling his name when you came to visit or when you reached down to touch his head.  In a sea of mammals, even Barney enjoyed being the center of attention every now and then.

In memory of Barney and all those dogs who have lived a full life and gone before him, Bill the Poodle, Max, Schotze, Simon, George, Rocky, Sydney and so many others, we remember the words of Swinburne,

That even the weariest river

And so, our Barney has indeed arrived safely to sea today, the day of the summer solstice, the day the sun and our hearts stand still.